When I paint life reconstructions.  Unknown to the viewers, there is almost always a story behind every painting.  There are usually never any hints, or givaways, or any sign of a bigger picture, but as I'm working on the piece, I try to think of what that particular dinosaur or other prehistoric creature has gone through up until the exact second in time that I choose to capture it's image, as well as what might happen to it after that second is over.  In fact, if you were to ask most artists, they will probably tell you the same thing.  If you turn on Netflix and check out Bob Ross, you will see that he is a prime example of this, narrating his own story as he works along through his piece.  I strongly feel like if it wasn't for the artist's imagination and ideas behind the paintings, the products, themselves wouldn't have as much life.


Well, sometimes I do give hints as to what is about to happen, or happened in the past of my subjects.  In the case that I'm about to show you, most people wouldn't have noticed there was a bigger story, because the two paintings in question were painted, and therefore shared with the world a year apart from one another.  But they are connected.  Let's look at the first one below. 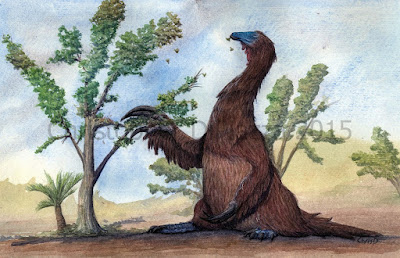 It's my Therizinosaurus, a plant-eating theropod that lived in what is now Mongolia.  I was inspired by sloths while painting this fellow.  Back when I was working at zoos, I witnessed one of our male sloths, Eugene, fall asleep with a piece of lettuce in his hand.  Minutes later he woke up from his spontaneous nap to continue feasting.  I thought it would be cute to show a dinosaur doing something similar.  However, falling asleep can be dangerous, especially if you have predators... 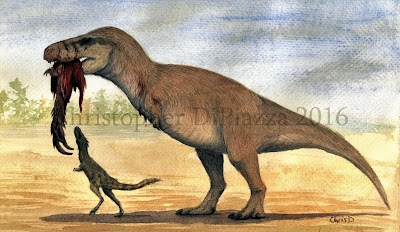 Jump forward in time one year to November of 2016 when I finished this painting of a mother Tarbosaurus feeding her young.  Tarbosaurus was also from Mongolia and would have coexisted, and possibly hunted Therizinosaurus.  Now look closer at what exactly it is that she's feeding her baby... 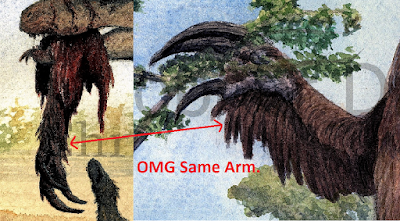 That's right.  The hunk of meat that is being fed to her baby is the disembodied arm of Therizinosaurus, who likely was ambushed by the tyrannosaurid during his nap.  But there's a twist here.  Look closely at the mother Tarbosaurus again.  Not all that blood is coming from the disembodied arm. 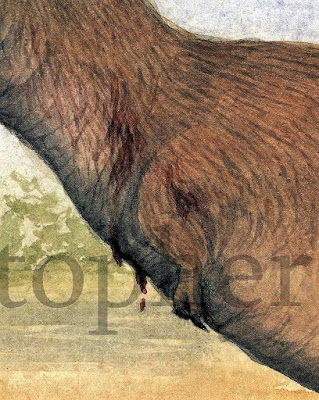 Therizinosaurus managed to get a few hits in with his enormous claws before he was killed.  One nice slash to the face and another, deeper stab, to his attacker's neck and shoulder.  This Tarbosaurus is bleeding, and judging by the second wound, she might not have much time left.  Let's hope her baby can learn to hunt on his own quickly!
Posted by Chris DiPiazza at 11:01 AM