Daniel Barta is a Ph.D. Candidate in Comparative Biology at the Richard Gilder Graduate School at the American Museum of Natural History. He grew up in Helena, Montana, and hold Bachelor's and Master's degrees in Earth Sciences from Montana State University. Broadly, He us interested in vertebrate reproduction, growth, and development. His research integrates fieldwork with phylogenetic, histological, and taphonomic techniques to better understand the evolution of ontogenetic trajectories, eggs, and nesting strategies of extinct animals and their living relatives. Fieldwork in the western United States, China, and Mongolia shapes my interests in the faunal evolution and biostratigraphy of the Cretaceous of Asia and North America. Currently he focuses on the post-hatching growth and development of basal theropod and ornithischian dinosaurs. The exceptional sample sizes available at the American Museum of Natural History can provide important insight into dinosaur growth rates and anatomical transformations during development, thereby establishing an essential context for understanding both individual morphological variation and the evolution of the extreme growth and metabolic rates achieved by dinosaurs’ bird descendants. He is passionate about sharing through outreach the thrill of the scientific process and our evolutionary history that it reveals. 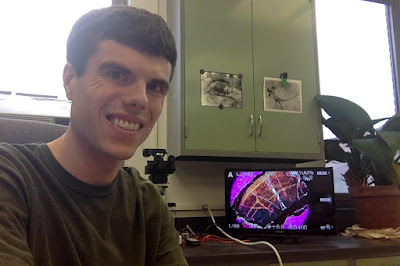 Question 1: Let’s start from the beginning.  What was your earliest sign of interest in paleontology that you can remember?

DB: I’m from Helena, Montana, and my earliest sign of interest came from a family visit to Museum of the Rockies in Bozeman, Montana, when I was about four years old.

Question 2: Did you have any professionals or family members who served as role models when you were younger?  Do you still have any now?

DB: My family members, especially my parents, greatly encouraged my interest in the natural world and in paleontology specifically. I still look up to them, and also to so many of my mentors and colleagues who have made great contributions to the natural sciences—there truly are too many to list here!

Question 4: Was there anything you did or learned as you were on your way to your current career that you feel got you to where you are?  By this I mean any sort of field experience, a class, networking with the right people, or possibly something different or all three?

DB: I’ll highlight three experiences chronologically. The earliest was a “job shadow” experience in sixth grade, when I got to work alongside Jamie Jette, a fossil preparator at the Museum of the Rockies, and learned more about what working with fossils is actually like as a career. This helped solidify my decision to attend Montana State University for my undergraduate studies. The second was my undergraduate research experience in China with Dr. Dave Varricchio of MSU, who later became my master’s thesis advisor. And the third would be a collections visit to the American Museum of Natural History during my master’s research with Dave that introduced me to my current Ph.D. advisor, Dr. Mark Norell, for the first time.

Question 5: You do a lot of work with dinosaur eggs, particularly birdlike theropod eggs.  Did you have a prior interest in this branch of paleontology prior to starting your career? Did it choose you?

DB: It was a little of both. Growing up, I’d always been interested in dinosaur eggs and parental care from reading books and news stories about both Montana’s Egg Mountain locality and the discoveries in the Gobi Desert by AMNH and other expeditions. I thought that they were both just really interesting scientific stories. However, my desire to devote much of my studies so far to dinosaur eggs really grew out of the undergraduate research that I mentioned earlier. I found that there’s a lot of work still to be done to understand the evolution of eggshell microstructure and what fossil egg assemblages can tell us about the biology of the animals that laid them.

Question 6: What was or is your favorite project in paleontology so far?  Would you be able to tell us about some of your current projects?

DB: This is really hard to pick, as I’ve enjoyed all the projects that I’ve been involved with, but I’ll highlight two projects here. I’m really proud of the paper in Acta Palaeontologica Polonica that I co-authored with Dave Varricchio on some Mongolian Cretaceous bird eggs that we named Styloolithus sabathi. It’s not every day that you get to help describe a new type of fossil egg, and I think the paper stands as a nice tribute to the late Karol Sabath of the Polish Academy of Sciences, who made key contributions to the study of fossil eggs. The specimens in our study help to reveal the very non-avian dinosaur-like reproductive mode of early birds, and may also hold implications for why these early birds went extinct along with the non-avian dinosaurs at the end of the Cretaceous.

My other favorite project is one of my dissertation chapters that I just recently submitted for review, and though I can’t say too much about it here, it involves anatomical study of the hands and wrists of early dinosaurs. I also recently worked on a couple of egg-citing projects related to dinosaur eggshell, but again, you’ll have to wait for the papers to hear more about those!

Question 7: Where have you travelled for your career?  Do you have a favorite destination when it comes to fossils?  Why?

DB: I’ve been really fortunate to travel a lot for my career. I’ve done fieldwork in Montana, China, and Mongolia, and collections visits and conferences have taken me to Europe, Asia, and South America. Mongolia is my favorite fieldwork destination. The quality of preservation and abundance of fossils there really can’t be beat, and we have some wonderful Mongolian colleagues who are incredibly fun to work with. 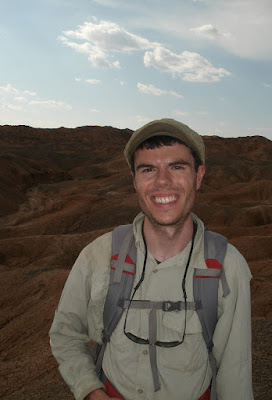 Question 9: Do you ever get criticized on any of your work?  How do you handle it?

DB: The criticism of my work that I've faced has, without exception, helped to sharpen my thinking and improve the final manuscripts. I’ve been really lucky in my short career not to have encountered anything directed at me that I would consider unfair or mean-spirited. I think it’s really important for everyone in science to work to ensure a collegial academic environment.

Question 10: Jurassic Park and Land Before Time (opposite ends of the spectrum, I know) were just two of the programs I remember as a kid that helped fuel my obsession with paleontology.  Did you have favorite shows, movies, or even toys growing up that fueled your passion?

DB: Those were two important ones for me as well! I also discovered many of the older dinosaur movies, like "The Land that Time Forgot,” pretty early on and still have a real fondness for those. Another thing that helped spark my initial interest was a blue Brontosaurus toy that my parents bought for me when I was about four (around the same time as my first visit to a museum).

Question 11: One of my pet peeves is when people assume paleontology doesn’t really do any real good in the grand scheme of things and is just a “for fun” science.  Do you think paleontology has a bigger part to than this?  How?

DB: Paleontology provides us with our only direct record of past biodiversity. Many people say that the current biodiversity crisis represents a sixth mass extinction, and we wouldn’t have any context for understanding what a “mass extinction” is without studying fossils. We would know very little about our modern world and even less about how to predict its future without studying past environments and the life that inhabited them.

Question 12: Who was the first paleontologist you met?  How was that interaction?

DB: The first paleontologist I met was Dr. Jack Horner. I attended a talk that he gave at an elementary school in Helena, and I later got to interview him during my sixth grade “job shadow” experience that I mentioned. Both were tremendously inspiring experiences for me as a young student. 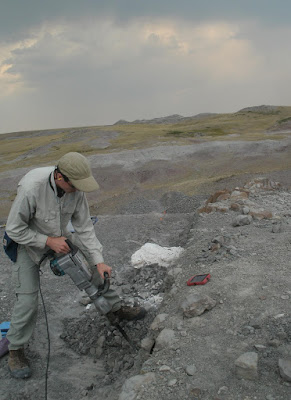 Question 13: Why do you think prehistoric animals are so influential to us today?

DB: Prehistoric animals are ambassadors from a succession of alien worlds ( our own Earth at different points in its past), and as such, are both tantalizingly familiar and startlingly strange. I think they provide one of the most accessible “hooks” for people of all ages to learn about the scientific process.

Question 15: What is your favorite prehistoric animal?  Was it different when you were younger?

DB: My favorite prehistoric animals now tend to be whichever ones I’ve studied scientifically, so currently the early carnivorous dinosaur Coelophysis bauri is one of my favorites. Like a lot of people, I was enamored with Tyrannosaurus rex when I was younger, and still am.

Question 16: If you could use a time machine to go back and pick only one prehistoric animal to bring back from history and observe alive and in person, which would it be and why?

DB: I think any of the whole range of extinct reptiles, mammals, amphibians, fish, and invertebrates for which we have no obvious modern analogues would be fascinating to observe, as a time machine might be the only way that we would ever be able to answer basic questions about their structures, functions, and behaviors. Among dinosaurs, I would of course love to answer my questions about Coelophysis growth in real time.

Question 17: Back to the time machine.  This time you can go back to any place and time period and have a look at what the environment was really like.  Which one would you pick and why?

DB: I would pick any time and place during the Triassic Period. One could examine not only the ecologies of the range of bizarre, extinct reptile groups, but also see how the components of the “modern” fauna were becoming established.

Question 18: Which is your favorite museum?  Why?

DB: Based on my answers above, this will probably not come as a surprise: my two favorite museums are the American Museum of Natural History and Museum of the Rockies, as they’ve both contributed immensely to the development of my ideas and interests, setting the direction of my professional life.

Question 19: What hobbies do you have?  (Don’t have to be paleo-related.)

DB: I enjoy hiking, bird-watching, spending time with family and friends, and learning about history, music, and the visual arts.
Posted by Chris DiPiazza at 1:03 PM