That Time I Won a Beer Art Contest Because of Dinosaurs

I won a beer contest because of dinosaurs.  That's a cool sentence I can say now without being a liar.  I'll tell you all about it.  Let's start at the beginning.

I wouldn't call myself a high-level beer expert, but I have learned to appreciate craft beers over the years.  That being said, I must admit the way I sometimes go about choosing a new beer to try, unless something in the description catches my eye...is the title.  If a beer has a cool title I am much more likely to try it.  If the can art is cool I'ma also likely to check it out.  Marketing. 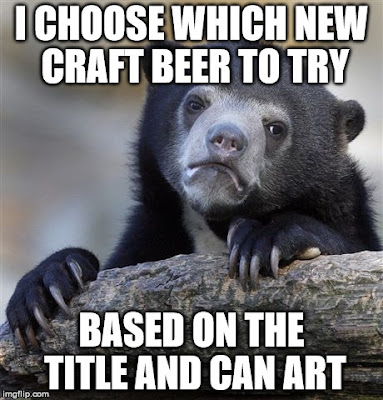 That being said, whenever I find beers that have pictures of dinosaurs on the cans or dinosaur-themed names I'm drawn to them.  Sometimes they turn out to be good.  Sometimes they aren't my thing, taste-wise.  However, I must admit I found one of my all time favorite beers to date thanks to this method.  It all started when my now wife and I were visiting her family in New Jersey a few years ago.  We decided to stop at her favorite wine and beer store, called Spirits Unlimited, to get a bottle of wine to bring.  Fun history lesson; Spirits Unlimited is sort of famous in New Jersey.  The store used to be a Food Circus store during the 1950s.  To help advertise this they built a thirty-foot clown sign out in the parking lot that is still there today.  The clown's name is Calico, he's sort of famous locally, and he's horrifying.   He's supposed to be holding a lit cigar, but because the cigar is white just like his gloves, it looks like he's pointing at you with blood on his finger.  Fun stuff.

So we were in this store hunting for wines and as usual I wander off to look at the craft beers.  On a shelf off to the side, near the cash register, I find a single large bottle of beer from Brooklyn Brewery, called "Quintaceratops".  Since it was dinosaur-themed I bought it, tried it that very night, incidentally fell in love with its dark, rich taste, and it is still one of my favorites to this day.  Sadly it was part of a limited stock and is no longer in production.

You know what else is sad?  The label art for Quintaceratops.  If the guys from Brooklyn Brewery are reading this, I'm sorry, I love you, but I need to be honest here and say the label looks lame. You see, the name, "Quintaceratops" is in reference to the fact that this beer was made using four times the amount of malt than a standard beer + rum = five + dinosaurs are cool =  Quintaceratops is the name.  Naturally, someone who knows a lot of dinosaurs would immediately think of the ceratopsian, Pentaceratops, which also has a reference to the number, five, in its name.  The designers over at Brooklyn Brewery maybe didn't know Pentaceratops existed and instead opted to put an image of a Triceratops with two extra horns growing out of its face...which is fine by me!  That sounds like a cool fantasy dinosaur and would make for some sweet bottle art.  The problem is the fact that the image that appears on the label is simply a little profile of that mythical Triceratops-like dinosaur surrounded by text.  What a missed opportunity!


Fast forward a few years to last month when my wife and I are living in Philadelphia.  Philly Beer Week, a week in June where bars all over the city hold special events promoting local craft beers, is happening.  I'm on my day off, eating breakfast, when I get a text from my wife at work telling me about this beer can art contest going on that afternoon nearby.  (Check out how proactive she is and how much of a bum I am by the way.  She is at work and manages figure this out in her break time.  Meanwhile I was getting ready to binge watch NETFLIX or pet our cat, Petrie, for most of the day.)  I decided I had nothing to lose and made my way over to the Garage Bar in Fishtown, Philadelphia, and find out that Brooklyn Brewery is one of the breweries sponsoring the art contest.  One of the judges explains to all the participants that we are to draw and color our own design for an already existing beer from one of the sponsoring breweries.  The second that information hits my brain I think to myself "QUINTACERATOPS SHALL GET THE LABEL ART IT DESERVES." 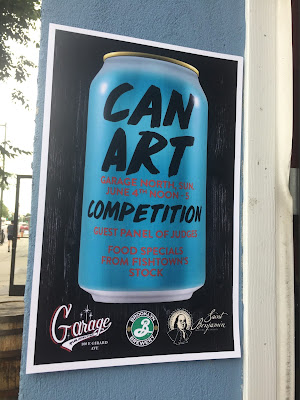 Immediately I get to work.  The design I chose was of Pentaceratops, the real "five-horned" dinosaur, with the Brooklyn Brewery logo on its frill.  (Fun fact; Pentaceratops actually didn't have any more horns than Triceratops since they both had three on the face and two jugal horns.  (I guess jugal horns only count as horns sometimes?  Genus names can be weird.)  I tried my best not to get psyched out by the competition since there were definitely some skilled artists participating.  Sometime during the hour and a half I was working I was given a free beer, which was cool.


I was able to finish with plenty of time, luckily, and simply waited for the judges to make their choice.  To my delight, my design ended up winning first place.  The judges apparently think dinosaurs are cool, too, and were thrilled to see one incorporated into a design.  Secondly, they were impressed that I chose a beer of theirs that was discontinued, and therefore not very well-known by most people. It was a good day.  Special thanks to Brooklyn Brewery sales representatives, Ben and Chris, for liking my design enough to give it first place.


I guess the moral of this story is you never know when constantly thinking about dinosaurs is going to lead to a cool experience and a good story.  If anyone from Brooklyn Brewery is reading this and you need more dinosaurs on any can or bottle art, shoot me an email.  I'd be honored to have your beer grace my artwork.