Prehistoric Beast of the Week Visits the Canadian Museum of Nature

This past winter my wife and I took a road trip up to Canada.  It was really cold.  I left my pillow in the car over night and in the morning it was frozen solid.  I mean it was a literal ice brick.  Anyway, part of our visit involved checking out the Canadian Museum of Nature in Ottowa, Ontario.  There were fossils.  It was awesome.  Let's look at some photos together!

So many Natural History Museums are in old, beautiful buildings with interesting architecture.  If you know me well, you'll know I have a penchant for gargoyles. (or grotesques as they're called if they're not the kind that barfs water when it rains.)  The Museum of Nature sported a stone Moose's face over each major doorway.  A charming welcome to set the mood for anyone coming in. 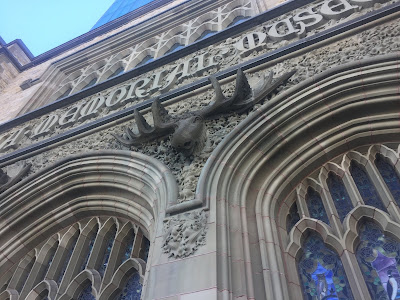 Because I am actually a large child, my wife knew the smartest thing to do was see the dinosaurs first, because otherwise I'd be really annoying and on edge until we did.  Fossil exhibit it was!

The Museum of Nature's dinosaur hall is jam packed with specimens for the space that it provides.  The focal point of the dinosaur room is a skeletal mount of the tyrannosaurid, Daspletosaurus.  This museum does not have a T. rex on display.  I'm actually cool with that.  It's refreshing to see other, less widely known, meat-eaters get center stage sometimes.  The Daspletosaurus greets you as soon as you walk in the door with wide jaws.  A good intro of what is to come. 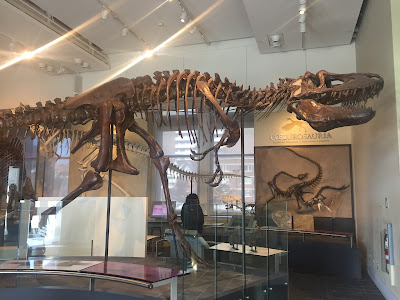 Another big theropod in this room that I was really happy to see was Carnotaurus.  This was actually the first proper Carnotaurus skeleton I'd ever seen in person. (Before this I had only seen the one in Disney World, which has an inaccurate skull.) 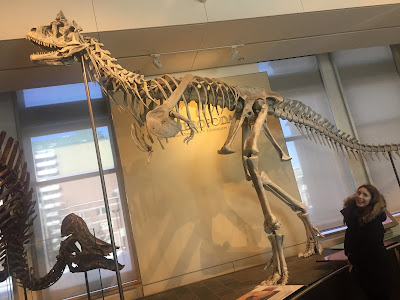 The Museum of Nature has a cool little section acknowledging feathered dinosaurs and the connection to modern birds.  This features a relief specimen of the ornithomimid, Dromiciomimus, a cast of Sinosauropteryx, which preserved feathers visible to the naked eye, and a 3D life reconstruction of Sinornithosaurus, which I believe I have seen on television and/or magazines before.


The Canadian Museum of Nature is particularly awesome if you are a ceratopsian fan, like me.  They devoted a LOT of space to a myriad of genera from the horns and frills clade.  The most impressive, perhaps, is the relatively recently discovered ceratopsian, Spiclypeus, a skull of which is on display in the corner.  Paleontologists from the Canadian Museum of Nature helped describe and name this dinosaur, which had a unique frill ornamentation, and was discovered having had an infected, arthritic forelimb when it died.  The actual fossils of Spiclypeus are also in the Museum of Nature's collection.


Other ceratopsians on display in this hall include Triceratops, Styracosaurus, Vagaceratops (mounted skull and articulated skeleton as it was found), Anchiceratops, and two Leptoceratops.


As I was leaving the hall of dinosaur fossils, I was pleasantly surprised to stumble right into the middle of an entire reconstructed scene from the late Cretaceous!  This walk-through features life-size, beautifully detailed models of a family of Vagaceratops, a nesting troodontid, and two Daspletosaurus.  This sections also makes for great photo opportunities since the Daspletosaurus totally look like they're smiling.


As any good paleoartist who also works with living reptiles would, I made a point to check out the Daspletosaurus' cloaca.   The model's was a vertical opening, like that of a crocdilian, not horizontal like that of a lizard...in case you were wondering.  You're welcome.


After the dinosaurs, we were led into another floor that featured prehistoric animals from the cenozoic.  The focal point of this exhibit was another 3D life reconstruction of a family of Megacerops, as well as a Dinictis and Archeotherium.  The Megacerops were life-like, possessing super wrinkly skin.  I like how the artist made a point not to simply modify the look of a modern rhino for them, since they weren't as closely related to rhinos as one might think, despite  their appearence.


The Archaeotherium looks to be based off the modern Red River Pig, color wise.  It's teeth are all fully visible and not covered by any sort of soft tissue that might be expected for a mammal, making it that much more terrifying.


I also appreciated the skeletons of prehistoric whales that were on display, showing the known fossil history of their evolution into the modern whales we know today.


There were plenty more fossils to see on display at the Canadian Museum of Nature that I did not include.  That being said if you're ever in the area, I encourage you to go visit and see for yourself!  I will leave you with another one of its amazing exhibits that was not prehistoric, but just as fascinating. They had an almost complete, real Blue Whale skeleton!  I am familiar with the 3D life-size model of this species on display at the American Museum of Natural History in New York, but it was just as awesome seeing the real bones of this incredible mammal so close.  I love how the skeleton was at visitor level, not suspended from the ceiling, so we could get a really good look at it from the sides, which is not something I'm used to seeing in whale exhibits.