Salamanders: Sharing our Earth with Wildlife

Earth Day is important.  It's the yearly reminder to everyone to treat everyday like Earth Day.  (Seriously, we can't afford to be good to our planet only one day per year.) That being said, I'd like to share with you my experiences with some wild neighbors I have met over the years and give you some pointers on how best to enjoy them and respect them, yourself.  I'm talking about amphibians.

Amphibians are awesome.  They're too often lumped with reptiles, both groups together being referred to as "herps", a term that I find dreadful since it takes away the individuality of both, vastly different, and equally fascinating clades of animals.  They're not even that closely related.  If anything we should be lumping birds with reptiles if we're going off genetics.  Why can't we just say "reptiles and amphibians"?  Is it that hard?

Growing up and living in the North Eastern United States, I have had the privilege of encountering many amphibians since childhood.  For reasons I cannot explain, I always found myself drawn to salamanders and newts, known as caudates, the most.  (I have shared some experiences with some pets that fall into this category before.)  My first wild Salamander encounter happened when I was eleven years old, while riding my bike through a trail near my house.  I decided to move a small log out of the trail and to my pleasant surprise, found a Redback Salamander sleeping underneath!


Redback Salamanders are by far the most common caudates in this, and many areas throughout Eastern North America.  They are tiny, barely a few inches long, with slender bodies and tiny limbs.  What is remarkable about is that they don't have lungs, belonging to a family called plethodontidae, appropriately nicnkamed, the "lungless salamanders".  So how do they breathe?  Redback Salamanders, like all amphibians, have absorbent skin that is permeable by both liquids and gases.  This means that they can breathe and drink through their skin.  This adaptation, combined with their tiny size, enables Redback Salamanders to absorb enough oxygen through their skin through diffusion, instead of breathing via air passageways and lungs, like many other tetrapods (vertebrates that are not fish) do.


Redback Salamanders get their name from the reddish brown band running down their backs.  However, many individuals of this same species exhibit an alternate coloration, which is black with tiny white speckles, nicknamed "Leadback Salamanders". (rhymes!)

When I went to college at Rutgers University in New Jersey, I spent a lot of time enjoying their botanical garden and walking trail.  Part of this trail passed over a shallow brook with lots of smooth, flat rocks.  During Fall, I would gently lift up some of these rocks and would often find another awesome salamander, the Two-Lined Salamander!

Two-Lined Salamanders get their name because they have two dark lines running down their backs.  The rest of the body is a pretty golden-brown color.  These little guys are in the same family as Redback Salamanders, also lungless, but prefer to spend their time in shallow water, hiding under and between rocks, rather than on land, under logs.  You can't find salamanders like this in just any stream, however.  The water must be cold, clear, and clean.  Finding them in a body of water is a good indicator that the ecosystem surrounding is likely a healthy one, devoid of pollution.  Animals like this, that tell us with their presence or lack of presence if a habitat is healthy or not, are called indicator species.

Probably the highlight of my salamander encounters so far occurred when I was visiting family friends in Pennsylvania on their farm  They told me they often find salamanders in their old spring house, which made sense since salamanders typically like cold, wet, dark places.  When I peeked inside, sure enough, to my delight, I encountered my very first (and only to date) wild Red Salamander! 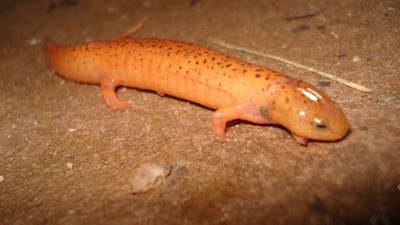 Red Salamanders are also members of the plethodontid family, but are larger than Redbacks and Two-Lined, growing up to six or seven inches long.  The one I encountered was still very young, likely recently metamorphed from the tadpole-like larval stage.  This species gets its name because of the color of its skin, although some individuals, like the one I met, are more orange, than red.  This brightly-colored skin is a warning to most predators that it is distasteful to eat.  Red Salamanders spend most of their time in cold bodies of fresh water during  the spring and Summer, hang out mostly in muddy burrows near the water in Fall, and will hibernate in burrows during the Winter.

Salamanders, and all other amphibians are precious, not just because I like them, but because without them, entire ecosystems, including us, would be in trouble.  Amphibians are all carnivorous as adults, and consume insane amounts of small invertebrates, including ones that can harm us.  Mosquitos, especially when they are in their aquatic larval forms, are a staple food source for many amphibians.  If there are fewer amphibians in a given freshwater habitat, then more (female) mosquitos will live to adulthood to suck blood from and spread disease among larger animals, including us.  (don't get me wrong, I respect mosquitos, and they are important in their own way to the earth, but too many of anything is no good.)


In turn, amphibians, themselves are important food for larger animals.  Raccoons, foxes, snakes, all sorts of birds, and large fish, and even some invertebrates, like giant water beetles and dragonflies in their nymph forms, eat amphibians regularly.  Without amphibians, these animals may have much harder times staying fed.

Sadly, amphibians happen to be some of the most sensitive animals in any given habitat. Their permeable, absorbent skin, which normally is an advantage to them for respiratory and hydration purposes, can also be their downfall when their homes are polluted.  If a water source has been tainted with pesticides or other human-made chemicals, amphibians absorb it  the most intensely and therefore are usually the first organisms to die off.  As stated before, because of this, amphibians serve as indicator species for environments they live in, telling biologists, ecologists, or anyone else who wants to learn about the state of that area, how polluted it may or may not be simply be being present or not.


So what can you do to help our amphibian friends?  Glad you asked!  Here is a list of things that I know of that can help.

1) Don't buy produce from sources that use pesticides.  Pesticides end up in water habitats where amphibians live via rain runoff.  IMPORTANT: Just because a product says "organic" on it does not mean it was pesticide free.  Also, a product that doesn't say "organic" very well may be from a safe source.  Do your research if you can to learn as much as you can about where food available to you comes from to best figure this out.

2) Use safe fertilizer in your gardens.  Some fertilizers are made of harmful chemicals to amphibians that can end up in their homes via rain runoff.  AGAIN: research what these chemicals are before you pass judgement.  The whole "if you cannot pronounce the name = dangerous" is not always true.  Do research on the ingredients in different fertilizers to find out more.

3) Where possible, leave large logs, flat pieces of bark where they are instead of cleaning them up.  These things can be homes to amphibians, as well as a lot of other small animals.  You can even put out man-made structures, like flat planks of wood to create potential homes for these critters.  Just make sure its in places where it is allowed and not where someone might trip over or hurt themselves.  (should be a no-brainer, but these days you can't be too careful)  If you are looking to meet a wild amphibian, and are suspecting one might be under a log or large plant, carefully put the object back the way it was after lifting it, hen place the salamander or other creature you met directly next to the log so they can crawl back under themselves.  If you put the log down over them you might accidentally squish them.  That being said, keep handling to a minimum, if any at all, since their absorbent skin soaks up whatever touches them.

4) Be alert for amphibians crossing the roads while driving.  A huge culprit for amphibian deaths is human development on their habitats, including roads.  Many amphibians seasonally migrate to breed.  Often times this involves crossing roads that have been built through their territories.  Especially on rainy days in the early Spring, be extra cautious for frogs and salamanders trying to make their way across roads.  You can also join local conservation organizations to help amphibians cross roads in known breeding areas, as well as help local scientists count individual animals of each species for ecology research.  (it's fun!)

5) Pick a captive-bred pet instead of a wild-caught one.  And always do all the research and homework on a particular species first.  (Never impulse buy) Once you have confirmed that you can appropriately care for an amphibian (or any species for that matter) for the duration of its lifespan, seek out a captive bred animal instead of one that was wild caught.  Sadly, many amphibians in the pet trade are taken from the wild.  A pet store employee SHOULD tell you truthfully where an animal for sale came from.  Reptile expos which typically occur every other month in many states also have lots of experienced breeders, selling their captive bred animals.  Always ask, though, since many animals at reptile expos are wild-caught as well.  Captive-bred animals are not taking numbers away from wild populations, are more likely to be disease-free, parasite-free, and are already thriving in captivity.  Wild caught animals, other than being taken from their natural habitats, weakening that ecosystem, are often stressed from transportation, and may not accept food or ever adjust to living in a tank.  It's an all around bad situation.  If you find a wild amphibian, yourself, enjoy looking at it, take a picture (no flash), then leave it be!

6) Support AZA accredited zoos and aquariums that have amphibians.  Zoos and aquariums that are AZA (Association o f Zoos and Aquariums) by definition, contribute large portions of their funds towards wildlife conservation and research.  This means that when you pay to visit a zoo, a chunk of that money helps pay for their efforts to save and learn more about endangered species in the wild, as you see and learn about their captive bred counterparts up close.  All these places proudly share the research and conservation they are currently involved in wherever possible.  Reach out to volunteers and staff there to learn more.  Having been a zookeeper, myself for many years, I can say we are always happy to talk to people about the work we do to help wild animals!

Hope you enjoyed me sharing my thoughts and love of all things amphibian with you.  Remember, treat EVERYDAY like Earth Day.  We need to protect the things we love!
Posted by Chris DiPiazza at 4:05 PM