Today we will be interviewing paleontologist,  Nathan Van Vranken.  Nathan has been a friend of mine for many years.  I have had the honor of providing artwork for many o f his scientific papers, research posters, and presentations.


Nathan is a paleontologist based out of the Dallas-Fort Metroplex in Texas. He specializes in Cretaceous interior seaway animals such as ichthyosaurs and mosasaurs and also has an interest in biostratigraphy. He holds as BS in interdisciplinary studies from the University of Texas at Arlington and a Msci from the University of Texas of the Permian Basin. Currently, he teaches introductory Earth Science courses at different Dallas-based colleges when not doing research. Nathan has worked on several projects during his academic career and is an advocate for public outreach on social media (Facebook) along with helping develop the computer model for the Mosasaurus found in the popular video game, Saurian.

Question 1: What was your earliest sign of interest in paleontology that you can remember?

NV: I think my first memory of doing anything paleontology related was my mom took me to the Peabody museum in Connecticut. I Think looking at the giant slabs of dinosaur tracks being mapped and documented got me interested in the field. This was sometime in the early 90s during the famous dinosaur craze. After that, visiting the dinosaur halls at the American Museum of Natural History and New York state museum for some large mammals really propelled me into thinking about this being a possible field of enjoyment. My first dig site experience was helping Skidmore college in middle school excavate artifacts in Saratoga Springs, New York along a place called Fish Creek. Admittedly it was archaeology but it still got me thinking about what is buried under my feet.

Question 2: Did you have any professionals or family members who served as role models when you were younger? Do you still have any now?

NV: I was always a Jacques Cousteau, Bob Bakker and Don Lessem fan growing up as far as my science background is concerned. Still, my biggest role model was Derek Main, he taught me about perseverance and how to go above and beyond to help the paleocommunity out and take risks.

Question 3: Was there anything you did or learned as you were on your way to your current career that you feel got you to where you are? By this I mean any sort of field experience, a class, networking with the right people, or possibly something different or all three?

NV: I think its a mixture of the three. Get yourself out there by helping the community out either getting some field or lab experience which helps bridge the gap between interested fossil collectors and researchers. Classes can help you know the current concepts and how to improve your critical thinking skills and understand some of the background concepts in our field. I think some of the best things that helped my career is to go to a professional conference such as SVP or GSA. Attend them and network with the professionals and ask questions to them about their research or talk to them about some ideas you had dealing with a topic. Pick a topic either big or small and present it at a conference either as an oral or poster presenter this is a great way to get noticed.

Question 4: Is the field of paleontology different now than from when you started as far as you can tell?  What would your advice be to anyone trying to make a career in paleontology (or science in general for that matter) now?

NV: I think paleontology is undergoing a lot of changes. Some really good ones. Back when I started we didn’t have the open access journals or being able to convert fossils into digital scans to do research on. Or at least that I was aware of. Now, I think that is the new normal and we should encourage it because most of it can help early career researchers produce and collect data and promote their projects. Again, think the best way to get started is be active in the community, social media is a great example and don't forget to branch out into other topics.

Question 5: What was or is your favorite project so far?  Would you be able to tell us about some of your current projects?

NV: Think my favorite project so far was working on my Texas ichthyosaur paper where I cataloged and updated the descriptions of the ichthyosaurian remains found in Texas. I also have a few fish and mosasaur papers I am working on and should be published soon.

Question 6: Do you have a favorite destination when it comes to fossils?  Why?

NV: I think my favorite destination would be here in Texas. My state has a variety of paleoenvironments, fossils, and segments of geologic time. You can also go from populated areas to collect in such as the Dallas-Fort Worth metroplex to about as rural as you can get, in places outside of the Big Bend region. Outside of the state I do have other favorite places like southeastern Montana which I haven’t been to since 2015 but I do miss that area. As long as I can look at the deep time and sample some local food I feel that would always be a favorite destination.

Question 7: A popular image of paleontologists is that they are constantly out in the field digging up fossils, which is true to an extent.  What people don’t realize sometimes is that a lot of paleontology work is conducted in a lab as well.  In your experience, how much of your projects (in general) take place in the field, and how much are in the lab?

NV: I think most of the work I have been doing recently is in the collections and labs. While I do love fieldwork and being an urban paleontologist I have to adapt. That's why I prefer being a meta-analyst and go though the collections and help clarify or update the records.

Question 8: You are most known for your work on marine life, like mosasaurs, ichthyosaurs, and fish.  Did you choose these subjects for your work or did they “choose you” in a sense?

NV: Well seeing I got myself started in Texas, the work pretty much picked me. I had always been interested into the interior seaway and seeing carbonate rocks are the most common in the state I worked with them. Working on the Arlington Archosaur Site project and walking the famous Glen Rose tracks got me interested into the coasts of the interior seaway and when I got into graduate school at the University of Texas of the Permian Basin I was given a mosasaur to study, one of the more common vertebrates found in the seaway. I worked with that specimen and was able to reach out to larger collections and their experts at SMU and the Sternberg to learn more about the seaway itself overtime. The ichthyosaurs I would have never thought to be working on them for being obscure in the state and actually enjoy them as much as mosasaurs.

Question 9: Is there a subject you’d like to work on that you have not yet?

Question 10: Do you ever get criticized on any of your work?  How do you handle it?

NV: I think it’s a norm now in social media to be criticized for any work. I admit I’ve been on the receiving end of some critics as much as the next guy. How do I handle it? I address their comments as best as I can and also be skeptical of their claims as the critic can be skeptical of mine. This is a skill that I am constantly improving on. It’s really just another type of peer review. 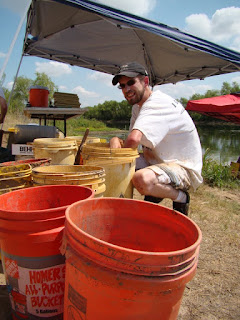 Question 11: One of my pet peeves is when people assume paleontology doesn’t really do any real good in the grand scheme of things and is just a “for fun” science.  Do you think paleontology has a bigger part to than this?  How?

NV: Yes I think it does apply to the grand scheme because it allows us to look at the data given and apply it to the trends we see today. I was once taught that Earth’s history is much like a Shakespearean play, the plot and characters change but the themes will always linger. If we can identify those themes we can apply it to our lives to see where we are going and where we came from and understand big picture concepts. Our field does do good not on a philosophical level but paleontology also is a great medium to communicate to kids and adults and it makes science accessible. If I can get a person off the computer or iPad and looking at the ground or natural world and ask questions then I think I’ve done some good. Paleontology helps bridge that gap and helps promote the idea that citizens can contribute and become scientists at any level.

Question 12: Who was the first paleontologist you met?  How was that interaction?

NV: I think the first true paleontologist I ever met was my old mentor Derek Main. Our first conversation was very influential as he told me the same advice I tell everyone which is to get out there and be active in the community and be a risk taker. The conversation I had was very welcoming and gave me the confidence to pursue this as a career.

Question 13: What is your favorite prehistoric animal?  Was it different when you were younger?

NV: Well my favorite prehistoric animal is probably Herrerasaurus. Probably had something different when I was younger like Stegosaurus or something. Still will always love my marine reptiles.

Question 14: If you could use a time machine to go back and pick only one prehistoric animal to bring back from history and observe alive and in person, which would it be and why?

NV: Probably something from the Pleistocene. My first shot at de-extinction would be a Bison latifrons. I think it’s just because it’s a big Bison and I always liked them.

Question 15: Back to the time machine.  This time you can go back to any place and time period and have a look at what the environment was really like.  Which one would you pick and why?
Question 16: Which is your favorite museum?  Why?

NV: Think the best museum I have ever gone to would have been the TELLUS museum in Georgia. Felt the displays for some of the local gulf coast fossils were pretty cool and atmospheric.

Question 17: What hobbies do you have?  (Don’t have to be paleo-related.)

NV: Ahhh well, this will out me. I admit, I do enjoy watching my anime and I am also an avid gamer. I like to collect Magic the Gathering cards and play various table top games like Dungeons and Dragons. I also enjoy video games, mostly strategy or fighters.  Other hobbies consist of collecting antique books and being a foodie.

Posted by Chris DiPiazza at 6:14 PM