Last year one of the most popular posts I wrote was for Halloween that featured a cartoon I sketched and painted featuring thirteen prehistoric animals that have names inspired by monsters from mythology or horror...as those monsters or horror characters.  If you still have not done so already, you can see it here.  This year, I have put together another drawing for you of thirteen more prehistoric creatures as the monsters they were named after.  Not going to lie, it was tougher this time around because there are only so many fossils named after this sort of stuff!  Because of that some of them may be a bit on the obscure side.(depending on how much you know)  See how many you can name without cheating!  When you think you have identified as many as you can, scroll down for the answers! (HINT: If you want a few cheats...check out my twitter @ChrisDiPiazza.  I've been putting up sketches of individual monsters all month.)


Think you got them all?  Are you suuuuuuure?  Scroll down for the answers!  Some of the names are clickable, which will lead you to their own page on this site with much more information about them. 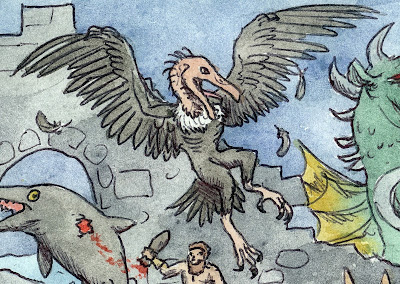 Harpymimus was an ornithomimid theropod, related to the more well-known Struthiomimus.  It was named after the harpy, a monster from Greek Mythology with the body of a bird.  Harpies are said to be unclean, loud, and generally unpleasant to be around. Diplacodon was a prehistoric mammal related to rhinos and horses that belonged to a family called brontotheridae, which are characterized by having wide, sometimes double-forked horns on their snouts.  The species part of this creature's name, gigan, is in reference to the Japanese kaiju, Gigan, which was an enemy of Godzilla.  This brings us to... 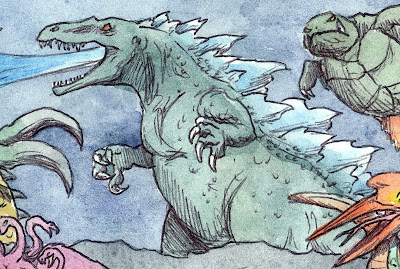 Gojirasaurus was named after the Japanese name for Godzilla, Gojira.  The dinosaur itself wasn't actually that big (by dinosaur standards), being very similar to the more well-known, Coelophysis, but Ken Carpenter, the paleontologist who named it was a huge Godzilla fan, and really wanted to name it after his childhood hero. 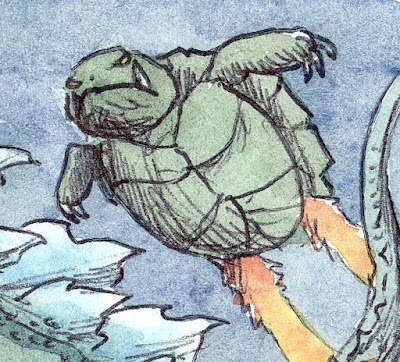 Gamerabaena was a prehistoric turtle, named after the Japanese kaiju, Gamera, which was essentially a giant turtle...with tusks, and can fly like a rocket from the back leg openings of his shell. 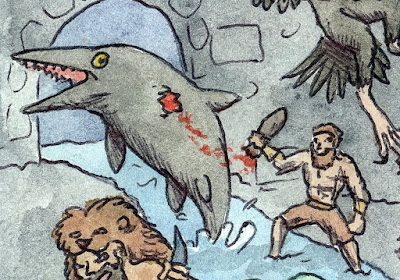 Grendelius was the name of an ichthyosaur, named after the monster from the famous Old English epic poem, Beowolf, named Grendel.  In the story, Grendel has his arm ripped off by the protagonist, Beowolf.  Grendelius, has actually been determined to be the same as another kind of ichthyosaur, called Brachypterygius. 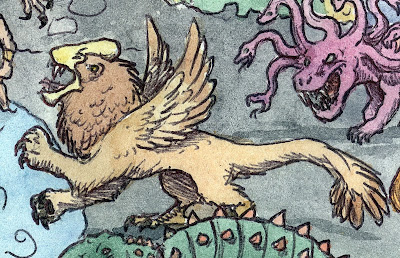 Anzu was an oviraptorosaur dinosaur named after the monster from Mesopotamian mythology, Anzu, which had the head of a lion, and the wings, legs, and tail of an eagle. 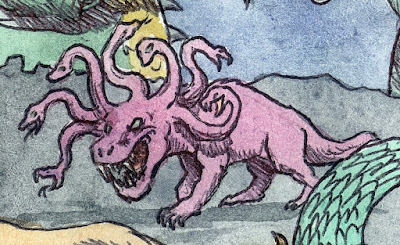 Gorgonops was a synapsid, an extinct kind of animal that was related to both reptiles and mammals.  Members of the gorgonopsid family typically had robust, almost dog-like snouts with sabre canines.  Because of their scary appearances, they were named after the monster from Greek mythology, the gorgon, which had snakes for hair and could turn you to stone if you looked at it. 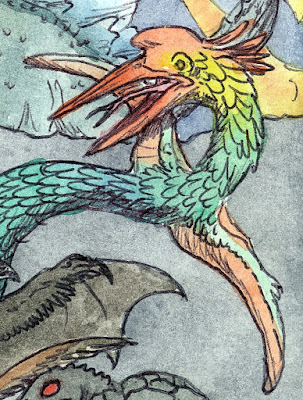 Quetzalcoatlus was one of the largest pterosaurs known to science.  It was named after Quetzalcoatl, an Aztec God who manifested himself in a few forms, the most famous of which, was a feathered serpent. 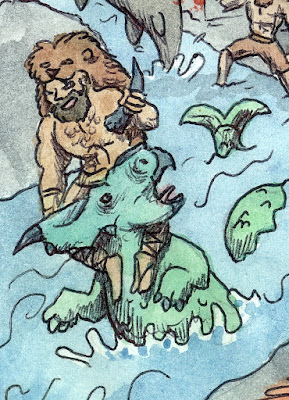 Achelousaurus was a ceratopsian dinosaur that had a low, flat boss on its nose instead of a horn, unlike many of its relatives.  It is named in reference to Achelous, an ancient Greek river god who had one of his horns broken off during a fight with the hero, Hercules. Tarascosaurus was a meat-eating dinosaur that was named after the Tarasque, a dragon from French biblical folklore that had a turtle-like shell and six legs. 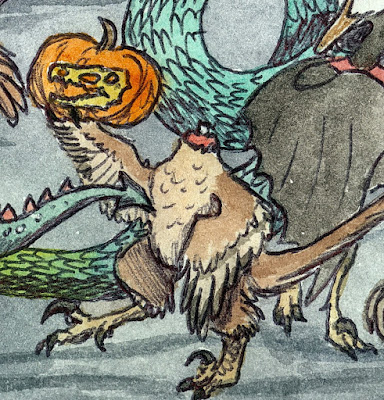 This was the nickname given to a small, meat-eating dinosaur that was discovered missing its skull.  Because of this, it was named after the character Ichabod Crain from the famous story of the Headless Horseman of Sleepy Hollow.  In the story Ichabod Crain is chased by the Headless Horseman ghost, who wants to chop off his head.  Ichabodcraniosaurus was likely really a Velociraptor. 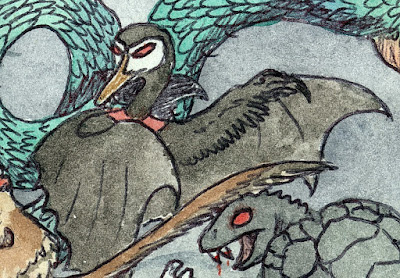 Bradycneme was a dinosaur, likely a kind of troodontid, that lived in what is now Transylvania.  Its species name is in reference to the famous vampire, Dracula, because of where it was found. 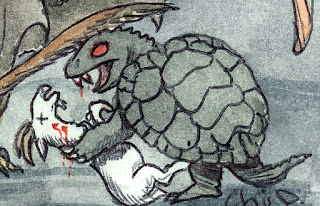 Chupacabrachelys was a prehistoric turtle, named after the cryptid monster, the Chupecabra.  Chupecabras are said to inhabit areas around Texas and Mexico, where Chupacabrachelys was discovered, and according to legend, suck the blood out of goats at night.  The name, Chupecabra, actually translates to "goat sucker".

I hope you enjoyed my second addition to my monster-dinosaur fusion.  In case you didn't notice, this latest cartoon I made to fit right alongside last year's.  Here is the full version below.  Happy Halloween!

Posted by Chris DiPiazza at 2:09 PM