Yesterday was National Fossil Day!  A day where we take time to appreciate fossils and all the glorious things they have to teach us....so for me it's a pretty ordinary day.  That being said what sort of paleontology site would this be if I didn't do something in acknowledge it?

Today I will share of you some fossils I have in my personal collection.  Some of them were collected locally and others are from when I did fieldwork in New Mexico.  (All were obtained with permission and legally!)  The ones I feel would be nice to show you today, however, have been in my collection since I was in middle school.  They were given to me by my music teacher who collected fossils as a hobby.  Once he found out I was a dinosaur-nut kid, we would pass time in between me practicing songs on my trumpet talking about the latest article on some newly-discovered dinosaur or something of that manner.  He was also kind enough, as I stated, give me some fossils every time he came back from collecting over the weekends.

The first set of fossils consists of crab claws and Horn Coral, which were found in Stroudsburg, Pennsylvania. Horn Coral was a kind of coral which was common during the Cretaceous.  Most of the Eastern coast of the United States was under the ocean during that time, keep in mind.  The crab claws, you can see the one large one which looks to consist of at least two parts of the limb, and the five small ones, are all missing the actual pinchy claw parts, which probably broke off sometime between now and when the little guys died millions of years ago.  So think of that meaty part just behind the claw....mmmm. 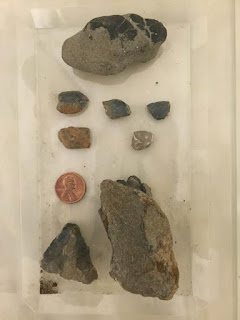 The second group consists of fossils from upstate New York. It includes some imprints from trilobites, which were VERY successful marine arthropods that lived during the Devonian Period, long before the dinosaurs, and were related to modern horseshoe crabs.  Trilobites came in many varieties from all over the world.  The ones here I believe are Phacops rana. It also includes some snail fossils, including both an imprint and positive cast of the curved shell, which I think is really neat.  The slab on the bottom includes two snails AND an imprint from a shelled mollusk, possibly a brachiopod, which came from Stafford, New York. 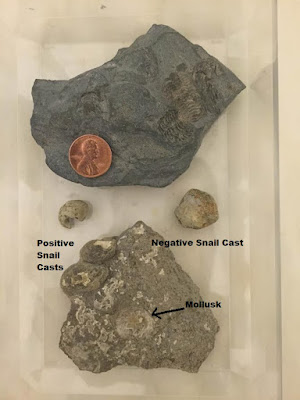 Happy National Fossil Day!  Remember, every fossil tells a story.  It's easy to forget that that tiny trilobite or snail you are holding at one time was a living creature that was crawling around right where you might be standing HUNDREDS of MILLIONS of years ago!  That's mind-blowing if you think about it!
Posted by Chris DiPiazza at 4:28 PM