Prehistoric Beast at the Academy of Natural Sciences

I visited Philadelphia's historical natural history museum, The Academy of Natural Sciences, my first weekend after moving to this city, almost three years ago.  I also landed a job working in their education department, and regularly volunteer prepping fossils in their lab.  That being said...for some reason I never wrote a proper post about it.  Let's fix that now.


The Academy of Natural Sciences is the oldest science research institution and museum in the United States.  This is the museum where Edward Drinker Cope worked out of during the infamous Bone Wars in the late 1800s.  It's also the resting place of the first two dinosaurs to be formally described in America, Hadrosaurus and Dryptosaurus.  Needless to say, it's a special place and should be one of the top museums to visit for anyone who likes paleontology or American history.


When you first walk in the front doors, you are greeted by the skeleton of the giant marine reptile, Elasmosaurus, swimming at you from the ceiling.  This creature has more significance than just looking cool, however.  It was this Elasmosaurus that in some ways started the Bone Wars, the historical event when Othniel Marsh embarrassed fellow paleontologist, Edward Drinker Cope, by pointing out during Cope's debut of this skeleton, that the skull was put on the tip of the tail, instead of the neck. 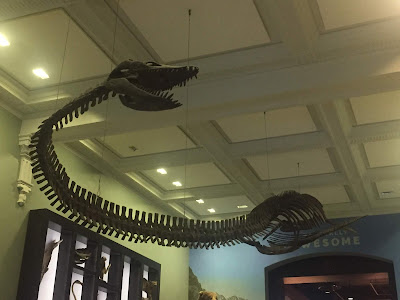 In the back of the front lobby is a cast and 3D life reconstruction of Tiktaalik, a fossil that helped prove the evolutionary connection between fish and land vertebrates.  The actual fossil of Tiktaalik is currently in Northern Canada, where it was discovered, but it was brought to the Academy of Natural Sciences to be studied and published.


When you first enter the Academy's fossil hall, you are attacked by a lunging Tyrannoaurus skeleton.  This is a cast of the same T. rex skeleton on display at The American Museum of Natural History, in New York, affectionately referred to by its ID number, 5027.


Right next to Tyrannosaurus, is a medley of other meat-eating dinosaur skulls, including Acrocanthosaurus, Majungasaurus, Dilophosaurus, Velociraptor, Herrerasaurus, and Eoraptor.  Lots of people come into the museum asking to see a Velociraptor, then get really disappointed when they are shown the actual skull and see how small their favorite Jurassic Park monster really was.  Luckily for those folks, we have a lovely mount of the larger dromaeosaurid, Deinonychus, in all its predatory glory, attacking a family of Tenontosaurus.


While we're on the subject of Jurassic Park, the Academy of Natural Sciences showcases almost all of the main dinosaurs featured in the beloved franchise.  This is actually really cool from an educational standpoint because educators giving tours can show visitors the dinosaurs they are already somewhat familiar with and therefore, more effectively implement the real science behind them.  Not sure if having all these specific dinosaurs was on purpose, but it's convenient.


Another notable skeleton on display is that of the crested hadrosaurid, Corythosaurus.  It's a massive specimen, towering over almost everything else in the room, flanked by the ceratopsian, Chasmosaurus, with two Pteranodon skeletons suspended near its head.  What I really like about this display, is that the Corythosaurus mount is almost all the original fossil bones, not casts.  The only exception is the skull, which is a lightweight cast since the real one was too heavy to be safely mounted up that high.


The main fossil hall has a fair share of marine fossils.  Most impressive, in my opinion is a beautifully preserved Ichthyosaurus that spent over one hundred years at the Academy, mostly in the behind the scenes collections.  Only very recently, in 2016, it was realized, upon closer examination, that this specimen was a previously unnamed species.  It was given the full name Ichthyosaurus somersetensis, and is now on full display in the main fossil hall.


The Academy of Natural Sciences has a fossil prep lab, where paleontologists and  volunteers work on cleaning off and assembling pieces of dinosaur bones collected every summer in Montana.  Most of the fossils that are currently being worked on are from the Late Jurassic Morrison Formation.  The sauropod dinosaur, Suuwassia, was discovered, prepped, studied, and scientifically described by folks from the Academy of Natural Sciences.  A glass case with a few bones from this amazing dinosaur is on display right next to the lab.  Visitors can walk right in, look at the specimens currently being prepped, and talk to /ask questions of the scientists and volunteers as they work.


Finally, I'd like to share what I am most impressed by at this museum, the first and second American dinosaurs ever described by science! (and they're both from my home state, New Jersey!) Hadrosaurus and Dryptosaurus are both on display at the Academy.  Casts of Dryptosaurus' bones are in a glass case in the main fossil hall, across from a wall mount of casts of the known skeleton of New Jersey's official state fossil, Hadrosaurus foulkii.  On the second floor, however, there is a full skeletal mount of Hadrosaurus on display.  The unknown bones of this skeleton are filled in with the bones of more completely known hadrosaurid dinosaurs, like Maiasaura.  Not only does the Academy have these two important dinosaurs on display, it is also the housing place of their real bones down below in its collections drawers.

There are lots of fossils on display that I did not include in this post.  In addition, there are many other exhibits, other than the fossil hall, that are worth seeing at the Academy.  If you are ever in the Philadelphia area, make sure to go see for yourself!  Stay tuned for part two of my tour of the Academy of Natural Sciences, where we will take a look behind the scenes and see fossils that you don't get to see on a regular visit!

Posted by Chris DiPiazza at 1:42 PM