Reptile Tracks: Past and Present

Recently the folks from the New Jersey Track and Trace Museum paid a visit to my work to gather some data to help them with their fossil research.  John McCauley, the curator of the museum, along with help from Henry Villa and John's girlfriend, Dianne, wanted to get footprints and tracks from some modern day reptiles to compare to trace fossils from Mesazoic animals.  A trace fossil is a fossil that clearly shows evidence of an organism without actually being the organism's remains themselves.  Examples of trace fossils are things like footprints, trackways and skin impressions.  These sorts of fossils are very important because they can give us information on things like how animals behaved, moved, rested, and what their posture would have been like when they were alive.  New Jersey in particular is famous for having a lot of trace fossils from the late Triassic and Early Jurassic periods.  Most of these fossils take the form of footprints from a dinosaur named Grallator.  The name Grallator is given to the maker of the tracks and the tracks alone.  No bones from Grallator have ever been discovered.  However, looking at the shape and size of the tracks plus the time that they were made it is likely that Grallator was similar in appearance to dinosaurs such as Ceolophysis and Dilophosaurus.  For all we know the tracks could have very well been made by either of those two dinosaurs themselves.  The only problem is there is no definite way to link the tracks from New Jersey to either of them yet.


The animal of focus for this day, however, was not a dinosaur at all but an extinct relative to modern crocodillians called Batrachopus that lived during the late Triassic period, roughly 220 million years ago.  Just like with Grallator, Batrachopus is a name given to the maker of the tracks with no actual skeletal remains known to science.  Judging by the shape of the tracks its likely that it was similar to many of the crocodillian relatives of that time, however.  These animals are called Protosuchians.

John and his team came armed with specially mixed mud that was made of same materials to the Triassic mud from the area.  What they intended to do was have a variety of modern reptiles I work with walk through the mud that was set up neatly on slate tiles to make tracks.  They would then allow the track to dry and eventually be able to make a cast from it.  Looking at the similarities between the tracks from various modern reptiles and Batrachopus, a more clear vision of the Triassic reptile when it was alive can be made.

The first animal to make tracks in the mud was a Dwarf Caiman.  Caimans are close relatives of crocodiles and alligators that are native to South America.  The individual we used for this is named Elvis.  This past summer (2011) a friend of mine had Elvis dumped on her from someone who had him for a pet and (I wonder why) couldn't keep him anymore.  She immediately called me up, knowing that my work could give him a better home than anyone's living room ever could and he has been thriving ever since!


The Dwarf Caiman was a successful candidate and made tracks like a pro.  The next animal we tried was Rocky, the Cuban Rock Iguana.  You may remember him from my first blog post here.  Rocky was a little less cooperative but ultimately still gave us some nice results.


The third animal was Bruno, a Black Throat Monitor.  Related to Komodo Dragons and the long extinct Mosasaurs, he was one of our bigger subjects but pleasantly enough, is also one of the most docile animals I work with. Because of this Bruno was most likely not going to walk for us.  Instead we just took prints of his front and back feet.

Lastly we got prints from our American Alligator.  Much like the Caimin I had to have his mouth taped shut because...well...he's an Alligator.  Don't worry it was just for this activity.  His mouth is free normally.  No animals were harmed in the making of any of this.


All in all it was a very successful day!  I especially love this kind of work because it really shows how important modern animals can be when studying paleontology.  John is putting coats of latex on the prints last I knew and hopefully he will have some nice casts to study very soon.  For more information about John and his work you can visit his site right here. Farewell until next time! 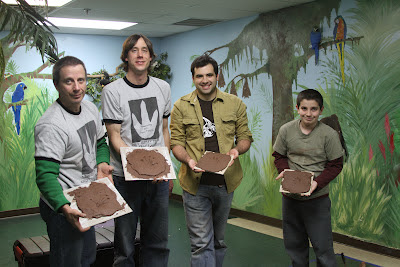 Posted by Chris DiPiazza at 2:59 PM No comments: