As you should know, birds are dinosaurs.  Therefore the turkey you may be eating at Thanksgiving dinner is...a dinosaur.

Because of this, back in 2012, I decided to doodle a little cartoon of this and post it on my facebook page.  Here it is below. 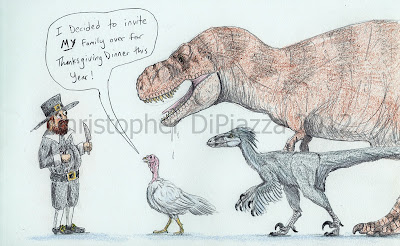 Well I never would have guessed, this thing actually went viral as soon as a certain popular science-themed facebook group caught wind of it and posted it to their page.  I had people all over the world sharing this cartoon and laughing at it.  I started getting texts from people I know telling me they saw it on their newsfeed...but not from me! (If I remember correctly the group did credit me as the artist, as they should have.)


Well this year I decided to do that cartoon again with a bit more care put in.  (a bit...its still a sketch basically with paint on it.)  Enjoy!

As you enjoy your meal this Thanksgiving, remember to respect your bird because millions of years ago, its relatives were eating ours!
Posted by Chris DiPiazza at 9:13 PM 1 comment:

Therizinosaurus: Beast of the Week

This week we will be checking out an increasingly popular, unique dinosaur.  Enter Therizinosaurus cheloniformis!  Therizinosaurus was a large plant-eating dinosaur that lived in what is now Mongolia, during the Late Cretaceous, 70 million years ago.  From beak to tail it is estimated to have measured about thirty three feet long and would have had feathers when alive.  The name, Therizinosaurus, translates to "scythe lizard" in reference to its long, scythe-shaped claws.  The species name, cheloniformes, translates to "turtle form" because its remains were originally believed to have belonged to a large turtle when they were discovered in the 1950s. (specifically the claws)


Therizinosaurus is sadly only known from fragmentary remains, including claws, and arms, and parts of the legs.  Most of what we know about it is based on more complete remains from related dinosaurs from the same family.  Therizinosaurus, along with its family, called therizinosauroidea, all were probably plant eaters, which is unusual for nonavian theropods.  Although the ornithomimosaurs were likely at least plan-eaters part of the time, possibly along with oviraptorosaurs, too.  If Therizinosaurus was like its closest relatives, it would have had a long, thin neck, and a relatively small skull, with a small beak at the tip and small teeth in the back, for shredding plants.


The arms and claws were probably Therizinosaurus' most impressive traits.  The arms themselves were relatively long, but would have had a limited range of motion, especially when it comes for reaching upwards.  Each hand ended in three fingers, each tipped with an enormous, scythe-shaped claw.  Each of these claws were about or just over three feet long!  They also were laterally compressed, and blade-like, and at first glance appear to have been really nasty weapons.  However, it is unlikely this was their primary function. (Although I'm sure if you ticked a Therizinosaurus off enough it wouldn't hesitate to use them to hurt you.)  It is more likely they aided Therizinosaurus in either feeding, or mating.  When it comes to feeding, these claws could have played a part in better manipulating branches and chutes towards the dinosaur's mouth to eat the leaves.  Despite the fact that Therizinosaurus could reach higher up with its neck than with its arms, they still could have been useful for bending plant limbs that started growing low and had edible foliage up high, towards, the dinosaur's mouth.  These claws also may have played a role in mate selection and display.  Who knows what kind of behavior Therizinosaurus may have exhibited when it wanted to impress a potential mate with those claws?  Birds today incorporate all sorts of body adaptations in mating displays and dances.  There is a strong chance many prehistoric dinosaurs were the same.  Since the fossil material from this dinosaur is also extremely limited right now, for all we know the extremely long claws may have been a display adaptation only present in mature males, for instance.  Only new discoveries made in the future could ever tell us that, however.


Therizinosaurus would have had a relatively wide body, with a low center of gravity.  It's pubis bone, which usually is facing forward in most nonavian theropods, would have been angled backwards.  These are adaptations for a plant-eating lifestyle.  Since they likely evolved from meat-eating ancestors, therizinosauroids needed to change their internal anatomy, specifically their digestive tract, drastically in order to make the change to an herbivorous diet.  This requires a bigger gut, since plants are more work to digest, and therefore need more space to ferment inside.  For modern examples, look to large plant-eating animals today, like cows.  These animals have wide stomachs, with multiple chambers to slowly break down the plants that they eat.  Other herbivores, like horses, have enlarged cecums, the section between the small and large intestines, for the same purpose.  Think of Therizinosaurus' gut as a huge, living, fermentation chamber.


Therizinosaurus' feet were wide, and each had four toes touching the ground, for extra stability.  In most theropods, the first digit is greatly reduced and doesn't touch the ground, like a dewclaw.  This stability was important since Therizinosaurus was probably extremely heavy for a bipedal dinosaur. Other heavy-bodied dinosaurs could walk on all fours to better spread their weight.  In life Therizinosaurus was almost certainly feathered, since a beautifully preserved close relative, named Beipiaosaurus was discovered with the remains of a layer of shaggy feathers preserved still intact.  Since therizinosauroids obviously weren't flying, it is likely these feathers were more for display or temperature regulation.

That is all for this week!  As always feel free to comment below or on our facebook page!

Lautenschlager, S. "Morphological and Functional Diversity in Therizinosaur Claws and the Implications for Theropod Claw Evolution." Proceedings of the Royal Society B: Biological Sciences 281.1785 (2014): 20140497. Web.

Perle, A., 1982, "On a new finding of the hindlimb of Therizinosaurus sp. from the Late Cretaceous of Mongolia", Problems on the Geology of Mongolia, 5: 94–98
Posted by Chris DiPiazza at 8:51 PM 1 comment:

Dakotaraptor: Beast of the Week

This week we will be checking out a recently published dinosaur.  Say hello to Dakotaraptor steini!  Dakotaraptor was a meat-eating dinosaur that lived in what is now the South Dakota, United States, during the very late Cretaceous Period, 66 million years ago.  From snout to tail it was about eighteen feet long, and was a member of the dromaeosaurid family, which also includes Velociraptor and Deinonychus, to name a few.  When alive, Dakotaraptor would have shared its habitat with many famous dinosaurs like Tyrannosaurus, Triceratops, Pachycephalosaurus, and Ankylosaurus.  The genus name, Dakotaraptor, translates to "Dakota Thief/Hunter" in reference to where it was found.


Dakotaraptor is an exciting find because for a dromaeosaurid, it was huge!  Few dinosaurs from this family get to the size that Dakotaraptor did.  Like other members of its family, Dakotaraptor had a retractable, sickle-shaped claw on the second digit of each foot, which would have been kept up, away from the ground unless it was being used to dish out damage, in which case it cold rotate forward, like a switchblade. These talons were each over nine inches long and may have been used for piercing deep wounds into prey, or possibly for slashing wide lacerations.  Many believe they could also have been for pinning struggling smaller prey in place while the Dakotaraptor used its blade-like, serrated teeth to strip off small pieces of meat.


In addition to the sharp teeth and giant claws, Dakotaraptor had a number of other important features to its anatomy.  The legs were particularly long, and lightly built.  This implies that Dakotaraptor, despite its size, was a very fast runner.  This is more similar to what you would see in smaller members of its family.  The larger dromaeosaurids, like Utahraptor, tend to be more robust, with shorter, thicker legs.  Sadly, other than teeth, none of Dakotaraptor's skull was ever found (yet) so we can only guess based on its closest relatives like Deinonychus or Dromaeosaurus, what it looked like in that region.

Dakotaraptor would have had feathers in life.  We can determine this based on the fact that multiple other members of its family have been discovered with feathers intact like Microraptor or Sinornithosaurus.  If that's not good enough evidence for you, it is important to note that the arm bone, called the ulna, of Dakotaraptor was found with evenly spaced little bumps on it.  These bumps are called quill knobs and are are present in modern birds as attachment sites for long, primary feathers.  Quill knobs have also been found on other prehistoric dinosaurs, like Velociraptor.


Dakotaraptor is an important find because it helps fill out our image of the community of dinosaurs that inhabited North America 66 million years ago, by adding a fast-moving, medium-sized predator to the already diverse mix.  Before Dakotaraptor, all the predatory dinosaurs known from that area were either extra huge, in the form of Tyrannosaurus, or much smaller, like Troodon, or a smaller kind of dromaeosaurid, called Acheroraptor.  Until now we assumed that juvenile Tyrannosaurus were taking on this niche.  Now we know they had more competition!

That is all for this week!  As always feel free to comment below or on our facebook page!

Lurdusaurus: Beast of the Week

This week, as result of a request, we will be checking out Lurdusaurus arenatus.  Lurdusaurus was a plant-eating dinosaur that lived in what is now Niger, Africa, during the Early Cretaceous Period, between 121 and 112 million years ago.  The genus name, Lurdusaurus, translates to "Heavy Lizard" because of its unusually robust skeleton.


Lurdusaurus was closely related to the more famous dinosaur, Iguanodon, and shared a number of telltale characteristics with it, such as the broad beak and thumb spike.  The thumb spike on Lurdusaurus was huge and wide, and may have been a weapon against members of its own species when fighting for dominance, or perhaps for defending against potential predators, when necessary.  Lurdusaurus, however was much more heavily-built than its relatives, possessing a very much barrel-shaped body.  Its legs were particularly short, especially below the knee, for an ornithopod, and likely was most comfortable on all fours, although it probably could still rear up on its hind legs if it needed to.  Lurdusaurus also had an long neck for an ornithopod.


Because of its unusual body plan, it is believed that Lurdusaurus must have been adapted for a slightly different lifestyle than most other ornithopods.  The most popular idea is that Lurdusaurus was spending a lot of its time in the water, where its immense bulk would be more easily supported and it probably would have even been able to move more quickly with its short legs, similarly to how modern hippos do.  It may have used its long neck to reach underwater plants to eat, or to allow it to breathe at the surface when in deeper water.

The idea of Lurdusaurus having been comfortable in the water makes more sense when its environment is taken into account.  According to what can be told about the rocks its bones were found in, which contained an abundance of fish and crocodile fossils, the environment during the Cretaceous there would have been dominated by freshwater marshes, lakes and rivers.

That is all for this week!  As always feel free to comment below or on our facebook page.