Finally I am getting around to sharing with you Gary and I's trip to New Mexico a few weeks ago!  My apologies for the delay but we both needed to take time after getting back to organize ourselves in addition to doing our regular jobs.

Tucumcari, New Mexico, is about an hour and a half long drive from Amarillo, Texas, with nothing but plains and desert on either side of the road. Then you find the town itself which centers around one road (Rt 66) consisting of a few miles of buildings, about half of which are abandoned.  It's interesting because this place was probably booming during the 50s. 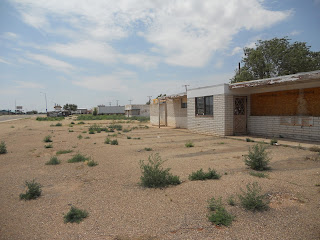 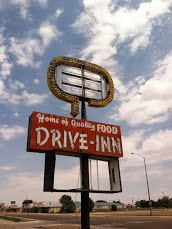 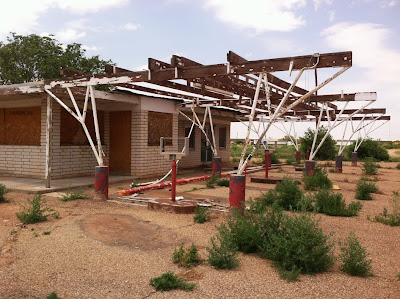 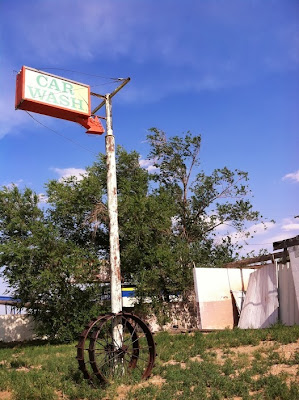 Oh did I mention it's hot?  REALLY hot.  Don't get me wrong we have our share of heat waves in New Jersey but out there, not only was it brutally hot, but also extremely dry which was something I wasn't used to.  Despite the heat the land is really beautiful. 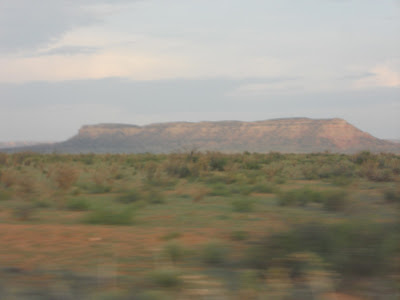 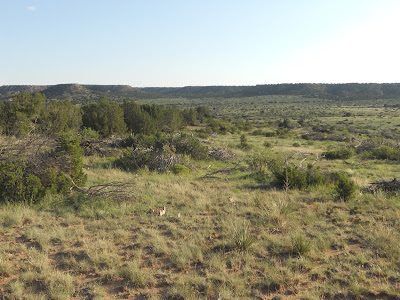 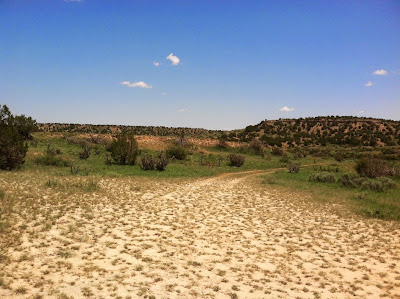 If you know me and my interests at all you would also know that I make it a point to at least find a few reptiles in a place like this.  In my short eight day stay I only was able to see three species of lizard, two of which I got pictures of.

There was also no shortage of Invertebrates.

I also was lucky to see some Mule Deer, a Pronghorn Antelope, and a Swift Fox off the road.  Unfortunately I wasn't fast enough with my camera.  Dang mammals.

The Mesalands Dinosaur Museum, which we were working with for this trip, is awesome and had many great specimens both on display and hidden away in its lab.  Here are just a few of their exhibits.


Now that we have the lay of the land lets get familiar with the actual work.  The site we were working on is called the Redonda Formation, and is from the late Triassic Period, about 200 million years ago.  It is from the same time as the nearby, more famous, Ghost Ranch site where the hundreds of Coelophysis skeletons were unearthed.  The environment 200 million years ago wasn't an arid desert but a network of streams and lakes thick with horsetails and ferns.  The reason why this site has so many animal remains is because animals would come to a river (perhaps the same one from Ghost Ranch) to drink during the dry season and die of thirst when there was no water.  Then their remains would have washed downstream when the water did arrive and eventually settle at the bottom of a lake.  That lake is now the site we were digging on.  Because of this there aren't any complete skeletons, just lots of random bones all densely packed in a relatively small area from a wide variety of different animals of that time.   Lets meet the animals they belonged to, shall we?

Redondasaurus was the most common animal we were finding.  It belongs to a now extinct group of reptiles called the phytosaurs.  Phytosaurs looked a lot like modern crocodiles but this resemblance was the result of convergent evolution and filling a similar niche, not an actual close family relationship.  In fact, when phytosaurs were alive, the true crocodilians were actually small land animals and didn't start to evolve into what we know them to be today until after the phytosaurs went extinct at the end of the Triassic.  One easy way to tell the difference between a phytosaur and a crocodilian is the nostril placement.  Crocodilians have their nostrils on the tip of their snouts while phytosaur nostrils are farther back, closer to their eyes.  Phytosaurs also had a variety of different kinds of teeth in their mouths which is unusual for a reptile (some are long and cone-shaped for snagging prey and some are flattened and blade-like for slicing meat).  Some of the Redondasaurus skulls that were being collected were over four feet in length.  The biggest adults could have grown to measure over twenty feet long from snout to tail, making them the most formidable predators of their time.  There were plenty of bones from their bodies as well as their teeth to be found.

Typothorax belongs to another now extinct group of reptiles called the aetosaurs.  They were likely mostly plant eaters, had odd upturned snouts possibly for rooting in the earth, and sported wide bony armor plates down their backs and even on their bellies and legs.  They look like armadillos, turtles, and ankylosaurs, but were more closely related to crocodiles.  If you remember I actually reviewed another aetosaur, Desmatosuchus, for a "Prehistoric Animal of the Week" while I was in New Mexico. Although many Typothorax bones were found from this site, the most common fossils from them were their rectangle-shaped armor plates.

Coelophysis was the only actual dinosaur known from this area.  It was a bird-like meat-eater and only measured about nine feet long (most of that length would be skinny neck and tail).  Keep in mind that during the Triassic, dinosaurs weren't the dominant land animals yet and still were competing with a lot of other kinds of large reptiles.  It wouldn't be until later, in the early Jurassic, that dinosaurs would evolve into larger, what some consider more familiar, forms.  Coelophysis bones are hollow (like a bird's) and are therefore very easy to accidentally break in the field if one isn't careful.  They are also much smaller than the bones from adult phytosaurs and aetosaurs.

The plant-eating Shuvosaurus was a very interesting little reptile.  At first glance it looks exactly like a dinosaur.  It walked upright on its hind legs, had a long neck, a beak, and it even had hollow bones!  However, because of the shape of its hips and the fact that it had a rotating ankle instead of just a simple hinge ankle, it was actually not a dinosaur, but a closer relative of crocodiles that evolved to look just like an ornithomimid dinosaur. (which didn't actually evolve until millions of years later)  It is unclear if the bones from this site are actually from Shuvosaurus or from a possible new kind within the same group.

You may notice that all of the animals I mentioned are reptiles, specifically archosaurs.  Archosaur is the clade of reptiles that includes modern crocodilans and birds.  Dinosaurs are the most famous members, but during the Triassic, the world was full of all different kinds!  I consider the Triassic the age of archosaur diversity.  Another thing you may notice about the Triassic is that several of the archosaur forms are evolving very similar body plans.  Dinosaurs like Coelophysis, poposauroids, and the rauisuchians (family that Postosuchus belongs to) all walked fully upright on their hind limbs and had hollow bones.  In fact, it was probably getting to the point where a lot of these archosaurs were competing with one another because they were becoming so similar.  Then a little after 200 million years ago a huge extinction hit the planet and wiped out a LOT of land animals, including the rauisuchians, shuvosaurids, aetosaurs, and the phytosaurs.  That's a lot of dead archosaurs!  For some reason only the dinosuars, crocodilians, and pterosaurs slipped through.  (note how the survivors are not similar to one another)  One could say that the reptilian bipedal style was quite popular back then but the dinosaurs wore it best!


So we went out there at the buttcrack of dawn to start digging.  We all piled into a monster truck from the 1980s and drove over terrain that we probably shouldn't have but somehow we survived every morning.


Luckily where we were working is a known fossil spot and finding bones wasn't hard at all.  In fact while we were digging out certain bones we had found, we would accidentally find more!  In the movies they always show paleontologists actors effortlessly brushing off a layer of dust to reveal a perfect specimen...yeah not happening here.  We were using chisels and hammers to break off chunks of rock to get to pieces of skeletons.

Luckily Gary and I both found notable specimens from Redondasaurus.  Gary found a huge rib and I almost demolished excavated a hip.   In addition, several Coelophyis and shuvosaurid bones were found as well as a HUGE Typothorax armor plate.


Another common misconception about fossil hunting is that all the bones are excavated and cleaned off perfectly out in the field.  In reality doing that is a bad idea because it would be too easy to damage the fossils.  Instead we break out the chunk of rock that the fossil is in and wrap it up in plaster to protect it.

Once the specimen is back at the lab we do what is called prep work.  This involves very carefully separating the fossil from the rock.  We use a variety of tools to do this depending on the situation.

So that is the short version of what went down in Tucumcari, New Mexico in  the summer of 2013!  Hopefully when we go next year we will find even more amazing discoveries!  Would you like to work with fossils?  What do you think would be more fun, field work or lab work?  We would love to hear your thoughts!

Chatterjee, S. (1991) An unusual toothless archosaur from the Triassic of Texas: the world's oldest ostrich dinosaur? Abstract, Journal of Vertebrate Paleontology, 8(3): 11A.

Hungerbühler A. 2002. The Late Triassic phytosaur Mystriosuchus westphali, with a revision of the genus. Palaeontology 45 (2): 377-418

Nesbitt, S. (2007). "The anatomy of Effigia okeeffeae (Archosauria, Suchia), theropod-like convergence, and the distribution of related taxa." Bulletin of the American Museum of Natural History, 302: 84 pp.

Nesbitt, Irmis and Parker (2007). A critical re-evaluation of the Late Triassic dinosaur taxa of North America. Journal of Palaeontology, 5(2): 209-243.

Posted by Chris DiPiazza at 4:50 AM